In Canada about 3 million farm animals die en route to slaughter every year. Most are chickens.

After a life in dark barns with little human contact, transport is emotionally stressful. Birds get dislocations and broken bones during catching, loading, and unloading. Many chickens overheat or freeze to death on the truck.

Both meat birds and laying hens have their food withdrawn up to 8 hours prior to transport, and lights are lowered. Meat birds are herded into a fenced area before catching. Laying hens are grabbed from inside their cages. The weak birds are vulnerable to injuries.

A crate is filled every 7 seconds! Humane handling is impossible. Birds suffer dislocations and broken bones due to rough handling.

During careless loading, birds can get their wings and heads crushed in the crates 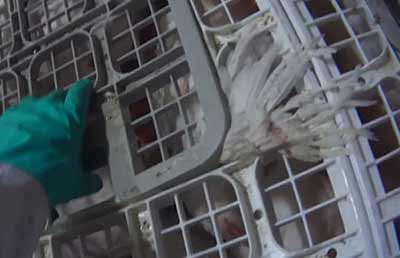 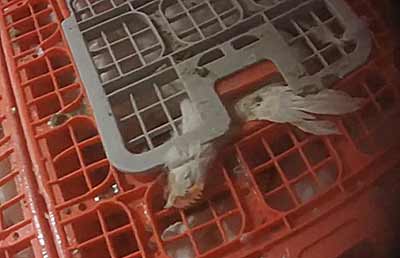 Mechanical catchers can be more humane but are also prone to abuse. The emphasis is speed, not animal welfare. Images from Mercy For Animals videos

Amsterdam-based Eyes on Animals shows current and improved ways to catch and load chickens in a short video called Calming The Catch (the better way is shown towards the end):

Crates are stacked onto trailers. Fragile, featherless hens are protected with only tarps even in -31°C wind-chill. Birds die from excessive cold or suffocate on different parts of the same trailer. Transport may legally be 36 hours with no food or water. For most birds, this is their first and last experience of the outside world.

The Maple Lodge Farms trial revealed that about 14% of birds on average died en route in the 20 charges to which the company pleaded guilty. In one case, more than half died after 10 hours in snow showers en route from Burnbrae Farms in Lyn, Ontario.

Another time, in April, 21% suffocated after 32 hours of transport. Both long transport and extreme weather kill birds during transport.

Shipping schedules are planned before birds are hatched. It's a highly coordinated process, with birds constantly shipping out and new ones coming in. To learn how economics routinely takes precedence over welfare, read our report (PDF link).

Catastrophic is not an overstatement

Some birds fall over from exhaustion. Birds suffer further injuries during unloading.

After all this, chickens continue suffering during slaughter